Our international project examples from the power-to-gas sector. 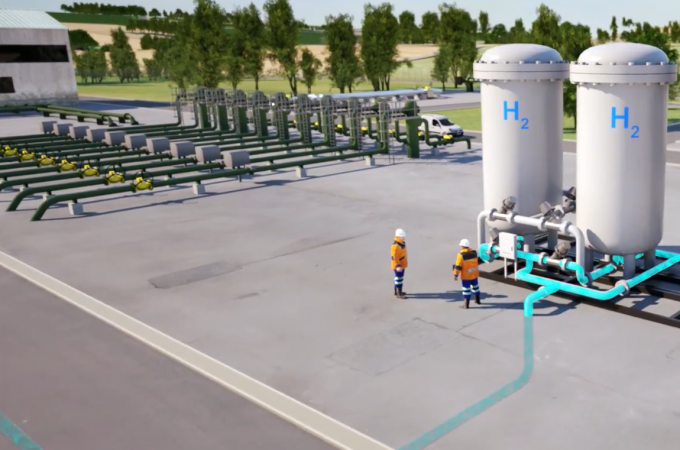 As the first large-scale commercial project in France, HyGreen Provence is based on a system for local regenerative power generation. In sever expansion steps , photovoltaic (120 MWp, 440 MWp, 900 MWp) and electrolyser plants  (12 MW, 180 MW, 435 MW) are erected to convert 50% of the power generated into hydrogen. The hydrogen thus produced can either be stored in the Storengy underground storage facility in Manosque or supply a network of "green" filling stations in the region and industry.  Storengy's know-how, infrastructure and work in research & development for the production and storage of hydrogen above and below ground are crucial to the success of such a project.

HyPSTER is a pilot project for the storage of hydrogen in the salt caverns of the Storengy storage facility in Etrez (France). The first, two-year project phase serves to carry out a feasibility study for filling a cavern with hydrogen as well as tightness and injection/removal tests to investigate the behaviour of the gas in the cavern. The tests will be carried out on the basis of the data obtained in the second phase of the project. Sales markets in industry, green mobility or renewable gas applications are currently being identified in order to further develop the project beyond the feasibility study.

In cooperation with Géodénergies, a scientific advocate for carbon-free energy, and the Institut d'Excellence pour la Transition Energétique (ITE), this project is being carried out by a consortium consisting of the Armines research facility, the Ineris centre of excellence for industrial safety and environmental protection, the Bureau de recherches géologiques et minières (BRGM), Air Liquide, Geostock, Brouard Consulting and Storengy.

The Méthycentre project is the first power-to-gas project in France to combine biogas production, hydrogen electrolysis and catalytic methanisation (synthetic methane production). This project, carried out by Storengy, uses the supply of surplus regenerative electricity to produce and store synthetic methane and green hydrogen. This means that these energy sources are available to our customers as needed, for example for green mobility and as bio natural gas or for feeding into the natural gas transport network or the Storengy storage facility in Céré-la-Ronde.

In 2020, the 250kW electrolyser was commissioned and the first test runs of the complete power-to-gas-system as well as the coupling to a biogas plant are planned for 2021.

The Storengy-led Hycaunais project in Saint-Florentin near Auxerre (France) combines electrolysis, biological methanisation and biogas production. The  CO2 produced at the Saint-Florentin landfill is used to produce methane based on the Electrochaea process. The hydrogen required for this process is produced from wind power via an electrolysis system with a peak output of 2 MW. It supplies hydrogen filling stations and supplies the hydrogen required for methanisation. The produced synthetic methane is fed into the gas grid and can be used as a green energy source in gas applications and bio natural gas mobility (natural gas filling stations).

In the HySecure demonstration project, Storengy, together with its partners Inovyn and Element Energy, is investigating the construction of a salt cavern for H2 storage in Stublach (Great Britain), the largest natural gas storage facility in Great Britain. In this project, potential improvements in key components for compatibility with hydrogen storage are identified. Following the completion of the first phase of the HySecure project (funded by the UK Government), a decision on the second phase of the project is expected by the end of 2019. In this, a dedicated hydrogen cavern for storing hydrogen is to be developed and constructed for several H2 projects in northwest England (such as the use of stored hydrogen in buses in Liverpool and Manchester). The aim of the project is to demonstrate the feasibility of storing large quantities of hydrogen in newly constructed salt caverns at significantly lower costs than surface storage.

As a partner in the Centurion project and with the support of Innovate UK, Storengy, together with Inovyn, ITM Power, Cadent and Element Energy, is launching the first phase of an innovation project to build a 100 MW power-to-gas plant at the Inovyn site in Runcorn (Cheshire, UK). The plant will produce green hydrogen for use in mobility, heating and industry. In the first phase, a 12-month feasibility study will be carried out to highlight the benefits of power-to-gas technology in terms of decarbonisation of energy systems and sustainable cost reduction. Storengy is investigating the conversion of natural gas and ethylene salt caverns to hydrogen injection and storage. The aim is to attract investors for the potentially largest energy storage system at the interface between gas and electricity networks. Financing is already secured through Innovate UK.

RINGS (Research on the Injection of New Gases in Storages) is a research and development partnership that investigates the behaviour of biomethane and hydrogen when mixed with natural gas in underground pore storage facilities. In cooperation with the Universities of Pau and Teréga (France), the possible proportions of such "new gases" in the underground pore reservoirs are being investigated. In laboratory experiments, the reservoir conditions are reproduced using rock samples, microorganisms, storage water and a variable composition of gas to determine specific concentrations for each pore reservoir tested. The project started in 2018 and will continue until 2021. A second project phase involving European partners is currently being prepared.

As the first project in the UK to receive green carbon credits, Vanguard in Middlewich aims to produce green hydrogen to fuel a fleet of waste collection vehicles in Cheshire East. This will use electricity from photovoltaic panels and rainwater to power a 50kW alkaline electrolyser located at the garbage truck depot. The generated hydrogen will be used to fuel waste collection vehicles and vans. The commercial use will begin in the fall of 2021 and the project has also been nominated for a Climate Response Award.

The aim of the MH2Regio project is to develop an economic concept for setting up an hydrogen infrastructure for green mobility in Frankfurt. By using low-cost electricity from waste incineration plants, hydrogen will be produced and made available to partners from local and long-distance passenger transport, heavy goods and freight transport, and inland waterway transport. Tractebel is responsible for the concept development, which includes a detailed feasibility study with conceptual design, proof of concept and cost optimization.

The SaltHy project (Storage Alignment with Load and Transport of Hydrogen) is a northern German flagship project on an industrial scale. The projects aim is to produce green hydrogen or by-product hydrogen regionally which is initially stored in underground salt caverns. If required, this can be transported by trailer or train to industrial and mobility customers in the first expansion stage. In the next expansion stage, transport via hydrogen pipeline is planned. The overall goal of the project is to achieve greater flexibility in balancing fluctuations in production and consumption and also to establish a green hydrogen economy in northern Germany.